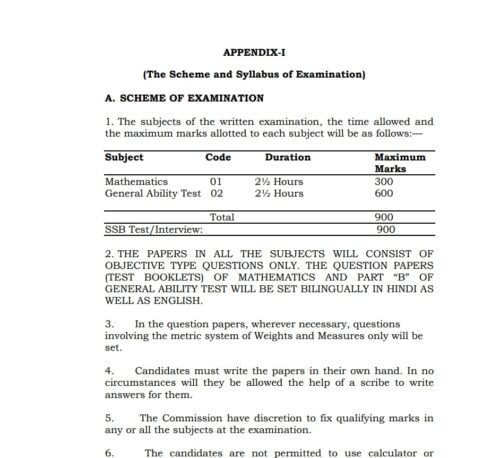 Here we have provided you with the latest NDA (National Defence Academy) Syllabus for the 2022 year. This is the Scheme and Syllabus of the NDA Examination 2022. The NDA 2 exam for this year is scheduled to take place in September 2022. The last date of submitting an application form is 7th June.

UPSC has released the latest NDA Syllabus for candidates. In the below table you will know about the NDA Syllabus 2022 PDF file.

Dear friends, as you all know that the notification of NDA 2 has been issued by UPSC. Here we are providing you with the latest NDA Syllabus 2022 PDF file for download. Here we have provided the NDA Syllabus subject-wise.

You can easily read and download it. There are only two topics in NDA Syllabus first is General Ability and the second is Mathematics. In the below table, we provide complete details of the particular subject’s syllabus.

Types of matrices, operations on matrices. Determinant of a matrix, basic properties of determinants. Adjoint and inverse of a square matrix, Applications-Solution of a system of linear equations in two or three unknowns by Cramer’s rule and by Matrix Method.

Angles and their measures in degrees and in radians. Trigonometrical ratios. Trigonometric identities Sum and difference formulae. Multiple and Sub-multiple angles. Inverse trigonometric functions. Applications-Height and distance, properties of triangles.

Integration as inverse of differentiation, integration by substitution and by parts, standard integrals involving algebraic expressions, trigonometric, exponential, and hyperbolic functions.
Evaluation of definite integrals—determination of areas of plane regions bounded by curves—applications.

The General Ability test is divided into two parts. In the part, First English is the main subject with a maximum of 200 marks. The second part is called Part ‘B’ with multi subjects like physics, chemistry, general science, etc. The maximum mark for Part ‘B’ is 400 marks.